Festival of the Lion King has moved location since our last trip, and it was a short walk from Tusker House – they had already begun the pre-show which was nearing the end, so it wasn’t long before the show began.

Once again, not much words from me here, only photographs. It’s a great show and well worth watching, especially if you are a fan of the film, The Lion King! 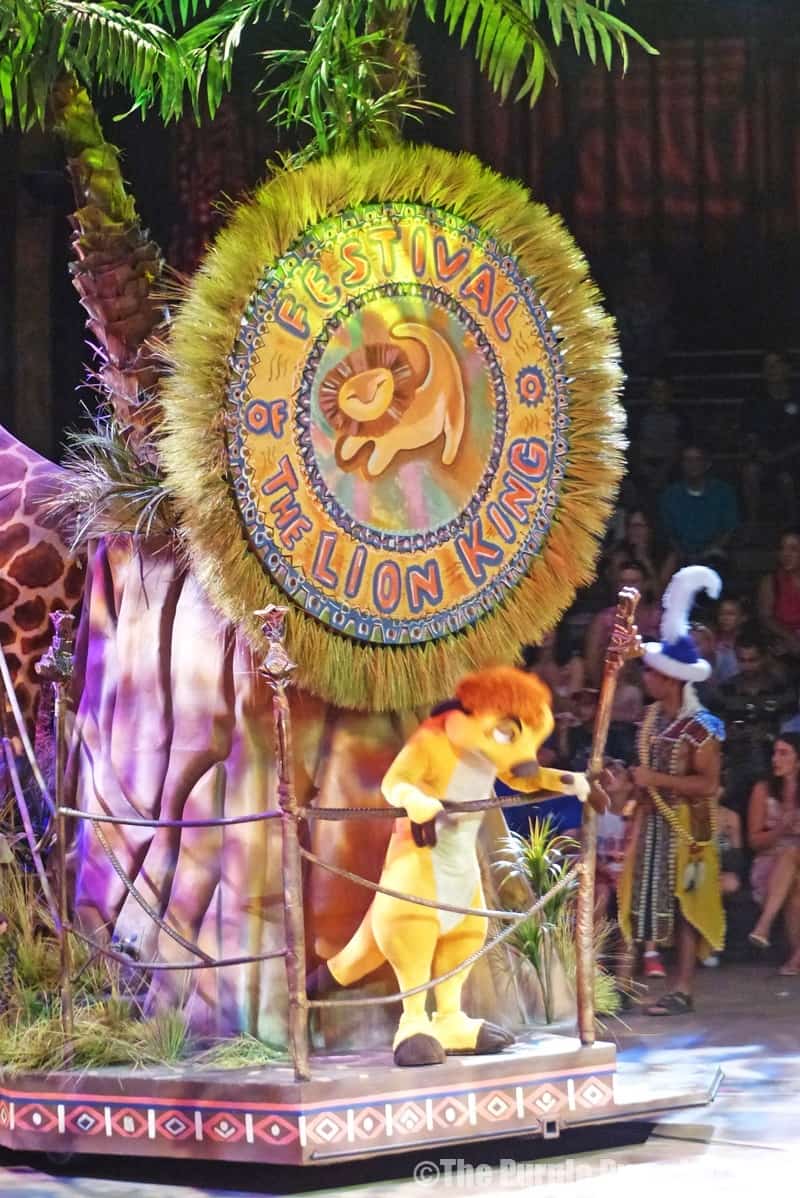 Timon, Tumble Monkeys and the Bird Ballet
Once the tribe assembles, Timon leads everyone in “Hakuna Matata.” Sing along if you know the words! The pageantry continues as the tumble monkeys enchant the audience with breathtaking leaps and tumbles to “swing” music. But danger is at hand during Scar’s song, “Be Prepared.” Those who would keep Simba from being king take over as a fire juggler heats up the stage, smoke thickening the air. When the smoke clears, the warmth rises in your heart during the aerial bird ballet danced to “Can You Feel the Love Tonight?”

“The Circle of Life”
Join the joyous chorus with Timon in a sing-along! Represent your animal section as you make some noise. Then get ready for a grand finale you will never forget! – Walt Disney World

There is so much going on in this performance, which is in the form of a revue, and isn’t a condensed version of the film or the Broadway show. The show is hosted by four performers dressed in costumes inspired by traditional African dress. Each has a Swahili name: Kiume (meaning “masculine and strong”), Nakawa (meaning “good-looking”), Kibibi (meaning “princess”), and Zawadi (meaning “the gift”). The story of the movie is not followed, being replaced instead with a circus style show featuring music from the films. Acts include acrobatic ‘Tumble Monkeys’, an Adagio (acrobatics) featuring performers dressed as birds Maji and Moto (Swahili for water and fire), a fire knife hyena, and an ensemble cast of dancers, puppeteers, and stilt walkers. – Wikipedia

The show ends with an uptempo medley of the songs in the show, with the final notes being from Circle of Life (gets me every time!) we filed out of the theatre and into the blazing sunshine.

And finally here is a video of the performance that we saw… had to change battery or something right at the end, hence two parts!