I had been looking forward to today as it was the Disney Villains Unleashed at Disney Hollywood Studios. I figured if I never got to Walt Disney World for Halloween, this was may be part way there!

The Disney blog made it sound awesome, and yeah, it was okay, but it wasn’t the awesome that I thought it was going to be… We actually felt so let down, that Steve emailed a letter of complaint while we were there. We would have complained on the night, but the queue for that was very long :( I’m going to include snippets of that letter within this trip report.

Our day started off with Liam wanting to go swimming, and me wanting to go shopping. So he went to the Old Turtle Pond pool which was the nearest to our room, and Steve and I went off for a spot of Halloween shopping. Instead of the usual Michael’s craft store, I thought we would check out Jo-Ann’s instead to see what they had on offer.

When you’re staying onsite, as much as the Disney bubble is fab, getting outside of it is lovely! We went to the store on Hwy 192, and had a bit of a mooch around. I bought a few things, but not too much really grabbed me. I think I would go to Michael’s next time.

On the way home we stopped at a Walgreen’s to pick up some things we needed, and drove back to Old Key West.

We drove to Hollywood Studios for around 2pm as we had a reservation for a late lunch at the Hollywood Brown Derby. My tip for parking at any theme park is to take a photograph of the lot name and the row number so that you know where you have parked at the end of the night! You think you won’t forget, but trust me, you really do! 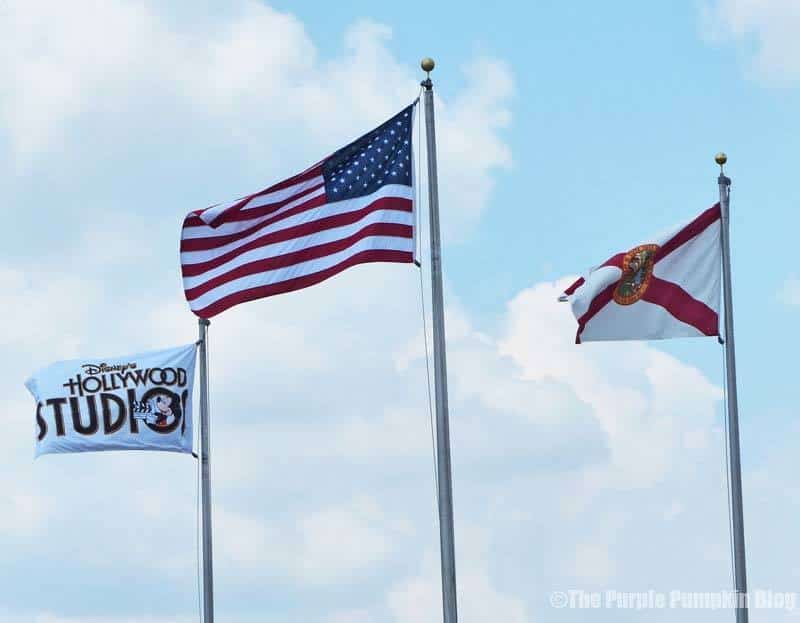 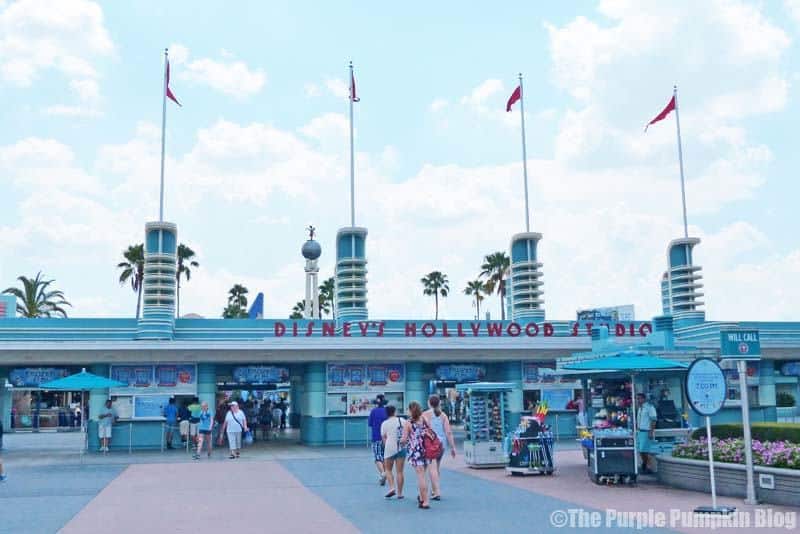 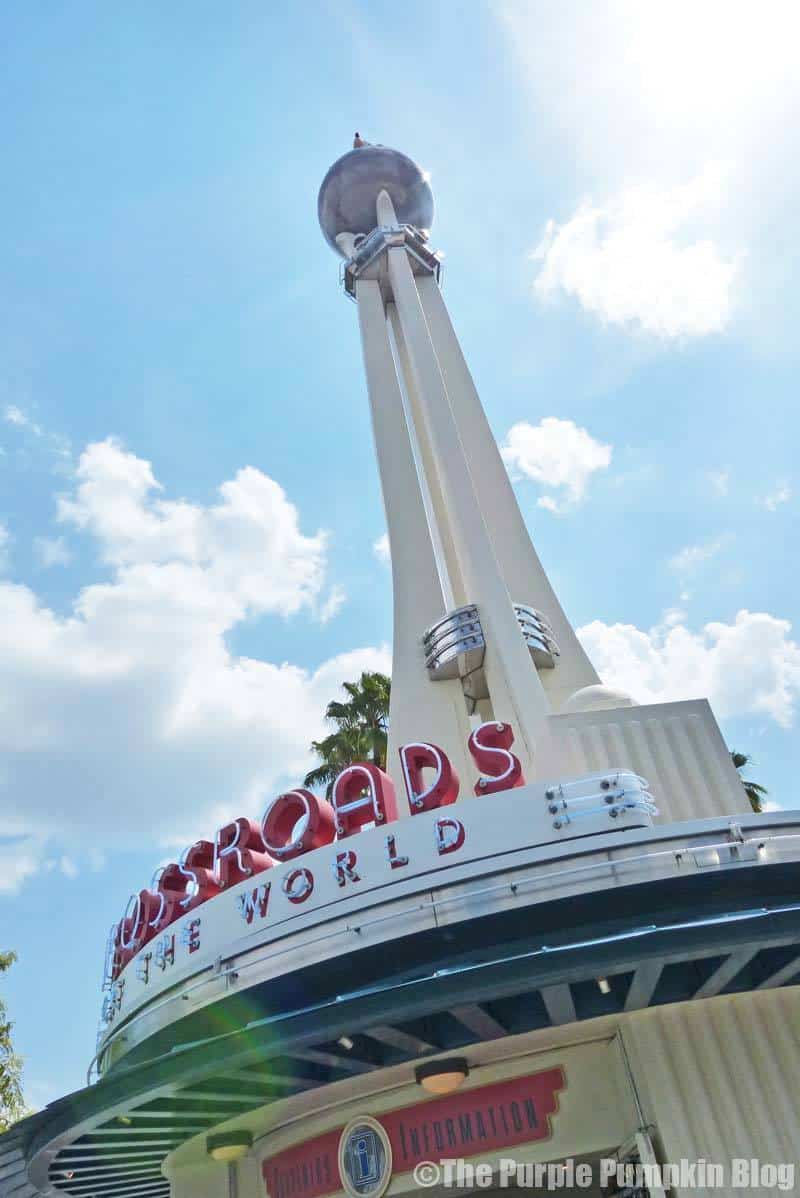 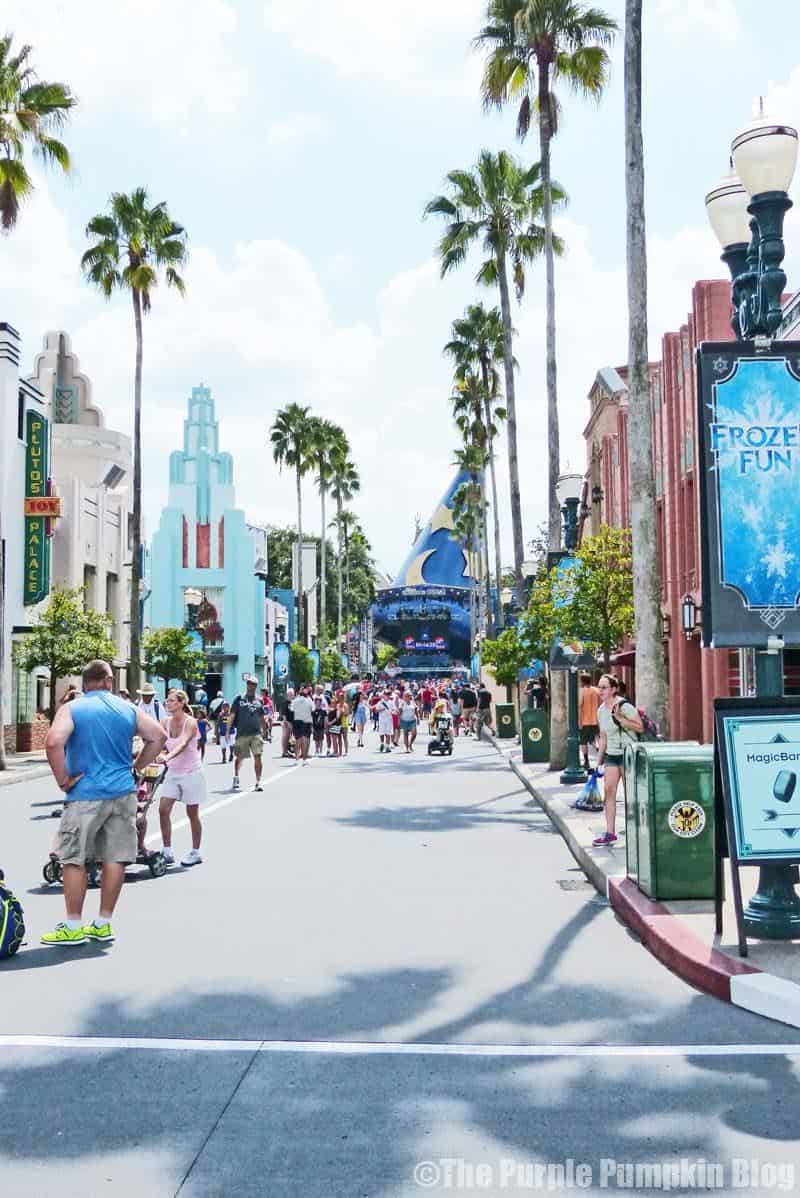 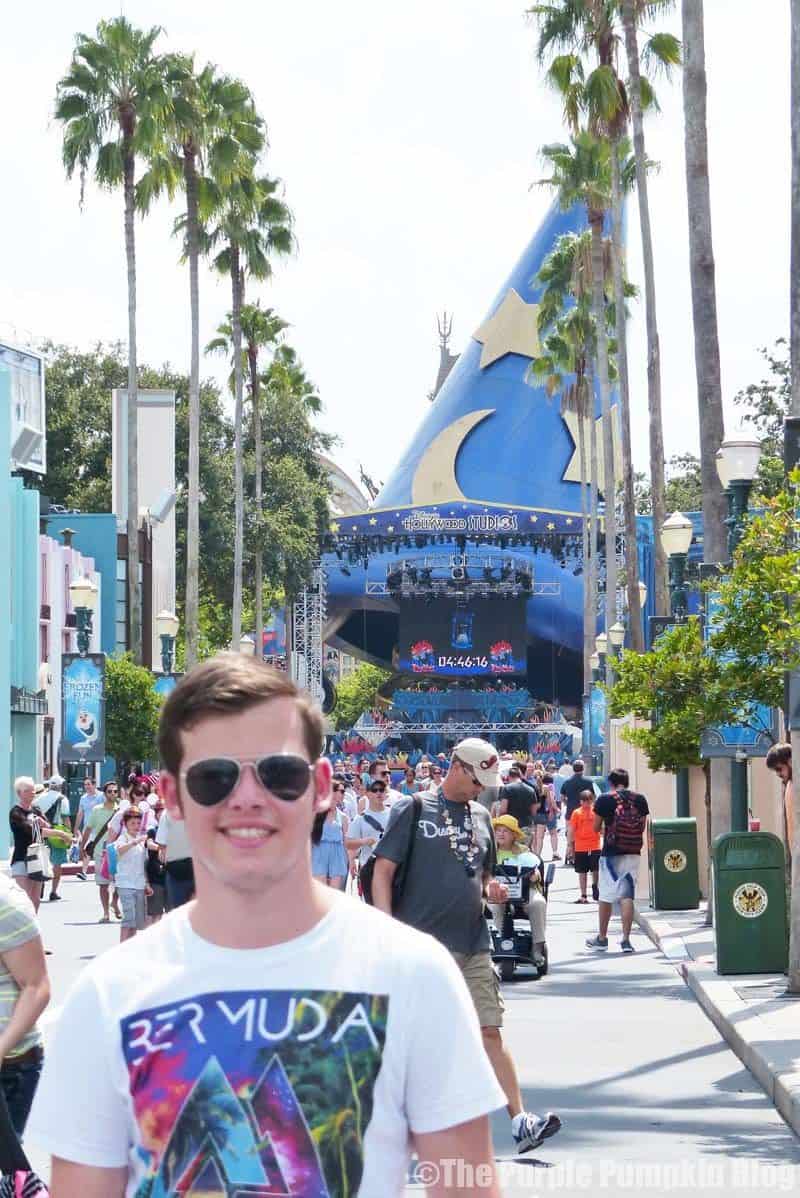 Since we were a little early for our Advance Dining Reservation, but not enough time to go and do a ride, we wandered in and out of the shops along Hollywood Boulevard, and had a family photo taken! I know not everyone is fond of the Sorcerer’s Hat, but I loved it, and I’m so sad that I’m never going to see it again! 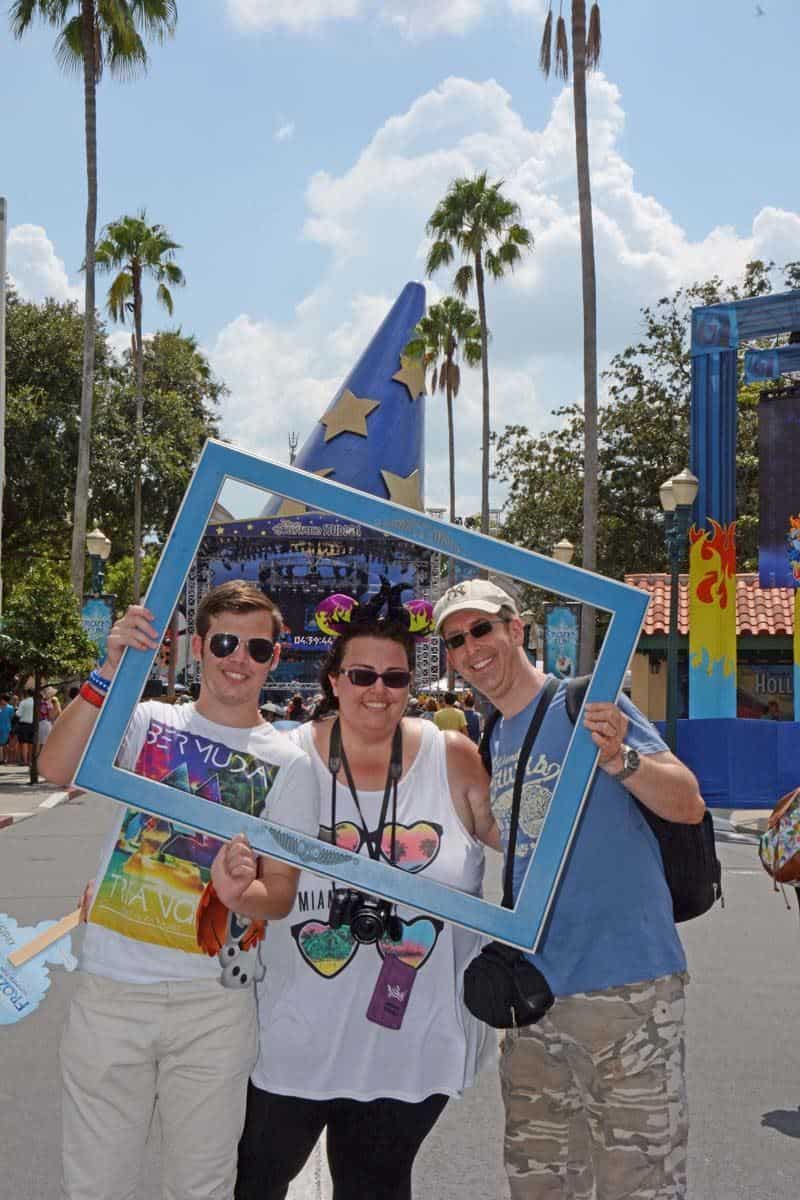 I saw and wanted this adorable Alice in Wonderland teapot, but it was so expensive! I didn’t buy it… But I did buy the equally adorable plates (excuse the crappy pic!) and the wicked awesome Disney Villains towel.

I love the onsite perk of being able to send your purchases back to your resort, so with my new goodies winging their way back to Old Key West, we continued along. 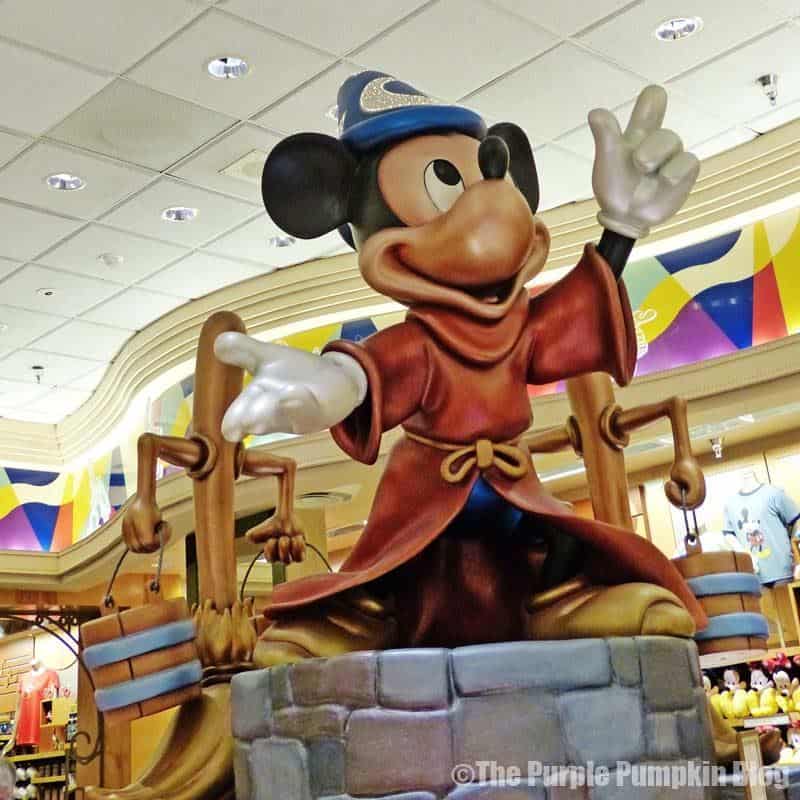 Eventually we headed over to the Hollywood Brown Derby, which is on the corner of Hollywood Boulevard and Sunset Boulevard, to check in for our Advance Dining Reservation. I think it may have also started raining, so we wanted to get out of the wet! 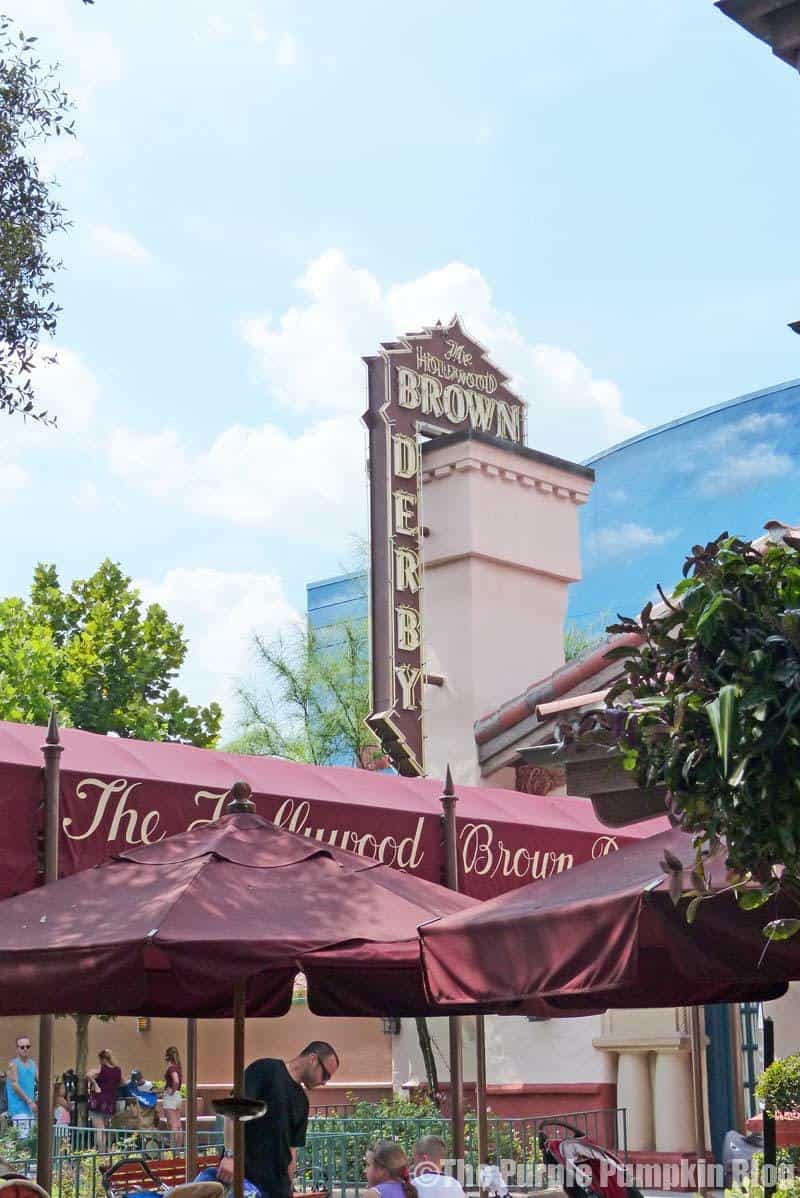 I don’t think we had to wait too long for our table, and were soon shown into the restaurant. I’m not actually that knowledgeable about the place, the history was printed on the menu!

The Original Brown Derby was first established near the famous intersection of Hollywood and Vine, and noted for its fine food, good times and glamorous company. It gained a loyal following from the movie and entertainment industries and the stars made the Derby their second home. Many celebrities found themselves honoured on the Derby’s Wall of Fame, a collection of caricatures that began in 1929, including Charlie Chaplin, Bette Davis and John Wayne. The Cobb Salad was invented when owner Robert Cobb raided the fridge seeking a midnight snack for the theatre magnate Sid Grauman. 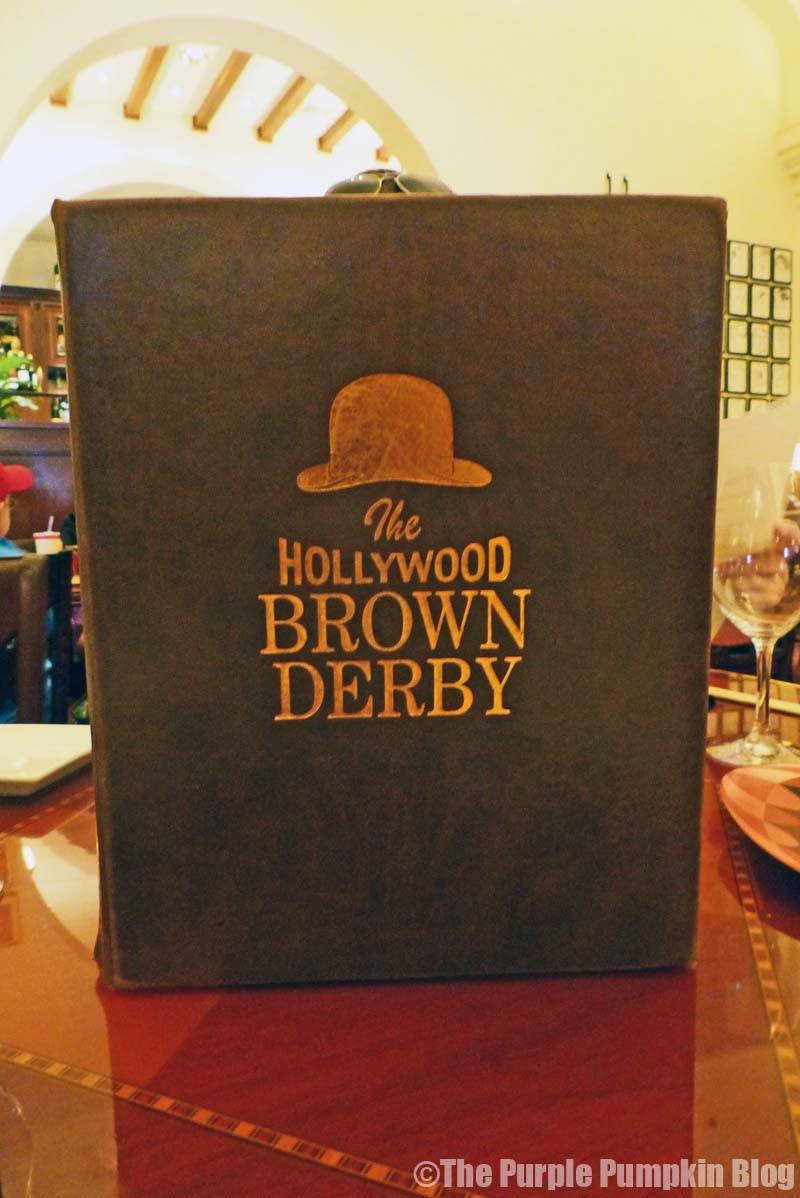 The restaurant wasn’t too busy, but we found the service to be a bit slow. Our waiter was very friendly and chatted with us when he could. I loved all the pictures on the walls, and the general feel of the place. As with most signature restaurants, we started out with a bread basket with some flavoured butter, but my pictures of that were hideous, so you’ll just have to imagine what bread looks like :P

I felt like I couldn’t go to the home of the famous Cobb Salad without having this, so that was the basis of my appetizer decision! I asked for the blue cheese to be left off as I can’t stand the stuff.

However, when I received my dish, it was covered in it. I did pull the waiter up on this, (politely I might add!) and it was replaced without a problem at all, and I was left to enjoy my salad which was very good. It can also be ordered as an entrée.

The spring rolls were stuff with filling, and the serving was very generous.

Apps were always quite hard for Liam on the Deluxe Dining Plan as he’s somewhat of a fussy eater, but he picked the shrimp and ate a little bit of it, leaving the rest for hubs and I to share. I have to say, it was delish! 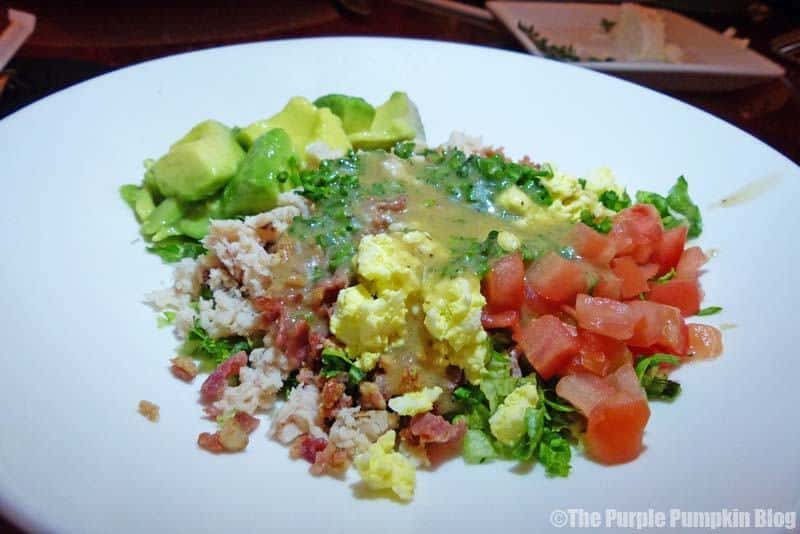 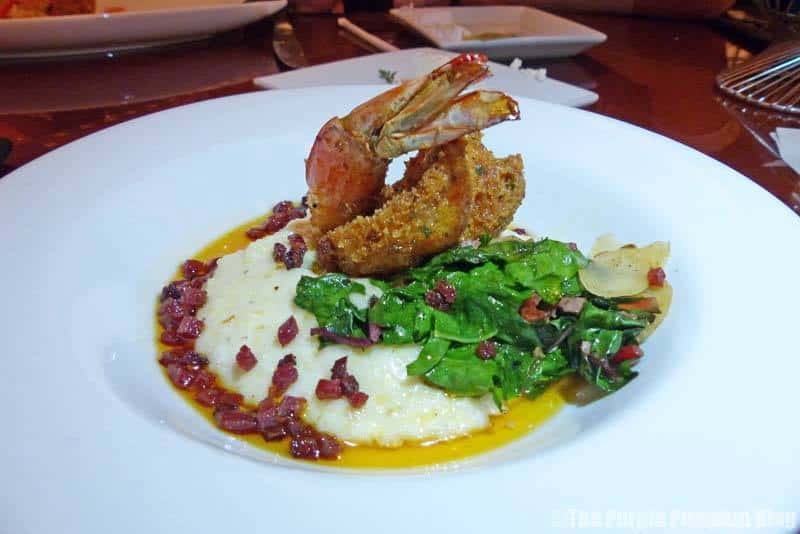 Me: Charred-Glazed Filet of Beef – with a red wine reduction, topped with a Cabernet and roasted shallot butter over truffle oil-wild forest mushroom mashed potatoes and sautéed haricot verts. ($43)

My steak was very good, as I found all the steaks that we ate around Walt Disney World this holiday, but I did find the colour of the Cabernet butter a bit odd!

The duck that Steve had was amazing, really juicy, and the potatoes were delicious.

Liam really didn’t fancy anything off the main menu, but the waiter was happy for him to order from the lunchtime menu. He decided on the burger, which sounded awesome with all the toppings on it, but since he is a fusspot, they were not present! He said it was a very good burger, and I think I might order it if we go back! 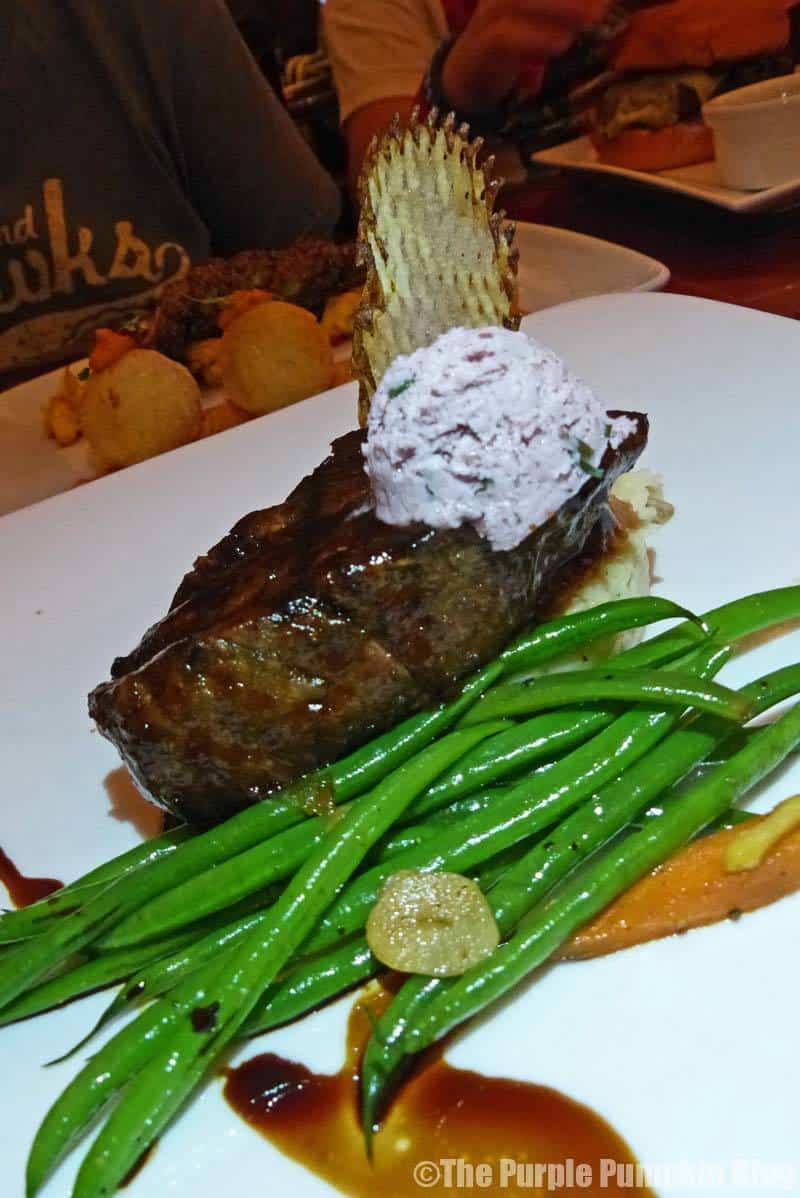 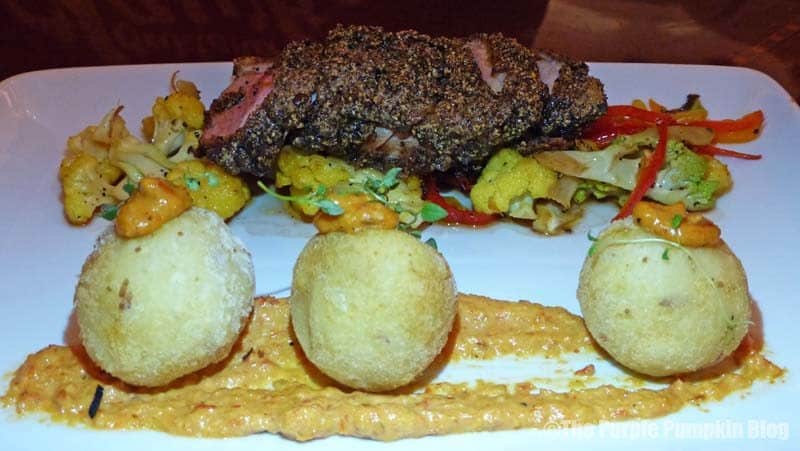 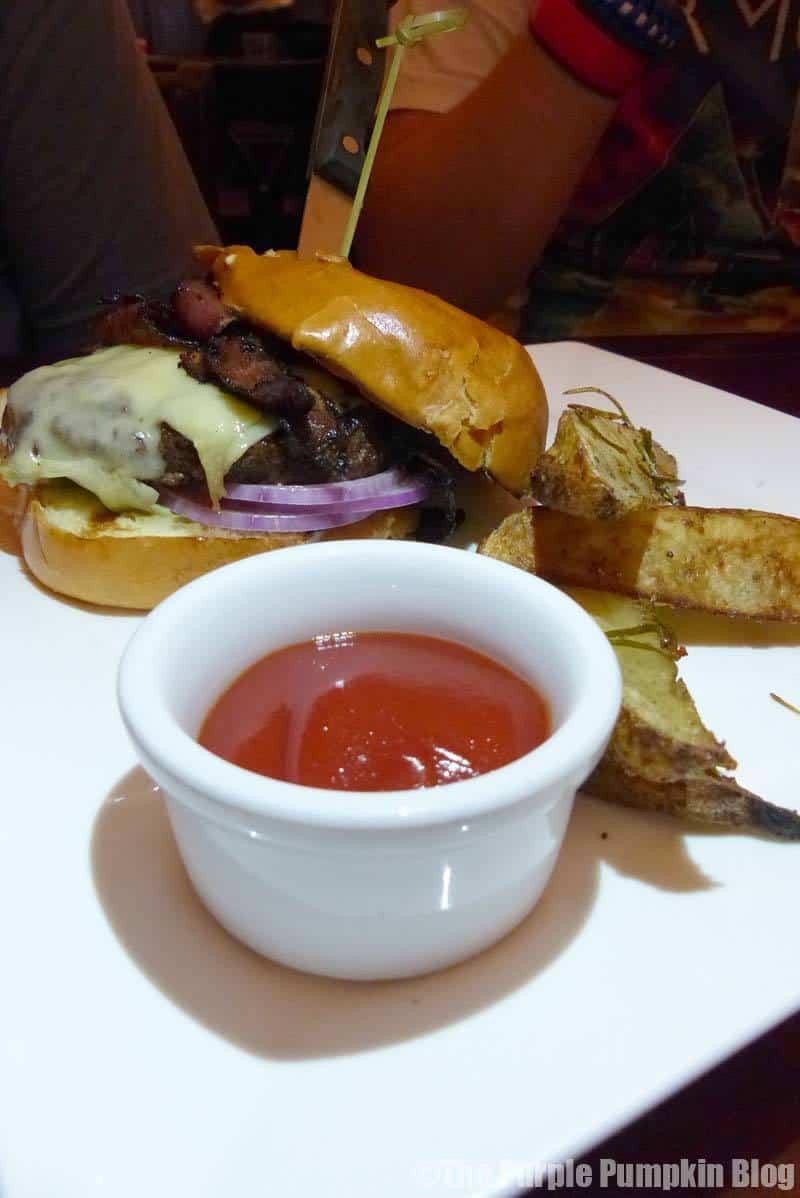 Finally, onto desserts, of which there were a selection of 9 mini desserts which you could pick a trio of. Since 3 x 3 = 9, we got all 9 and shared them between us! They were $9 per trio. 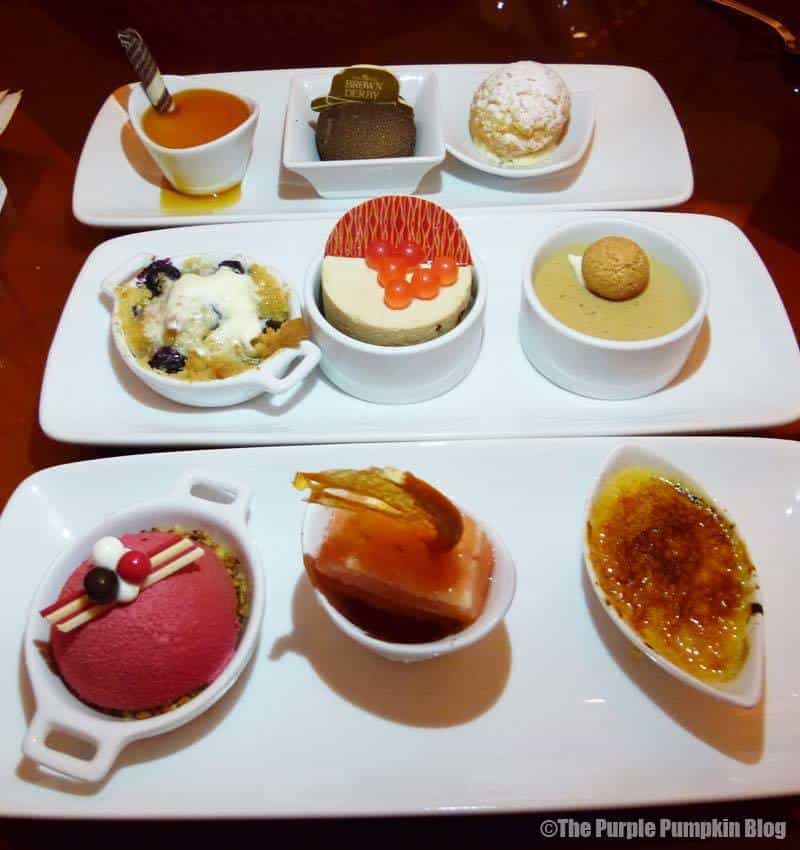 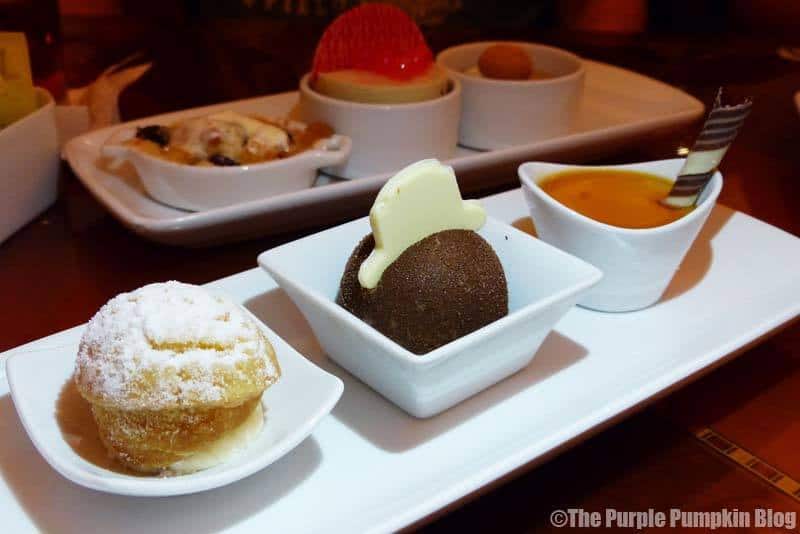 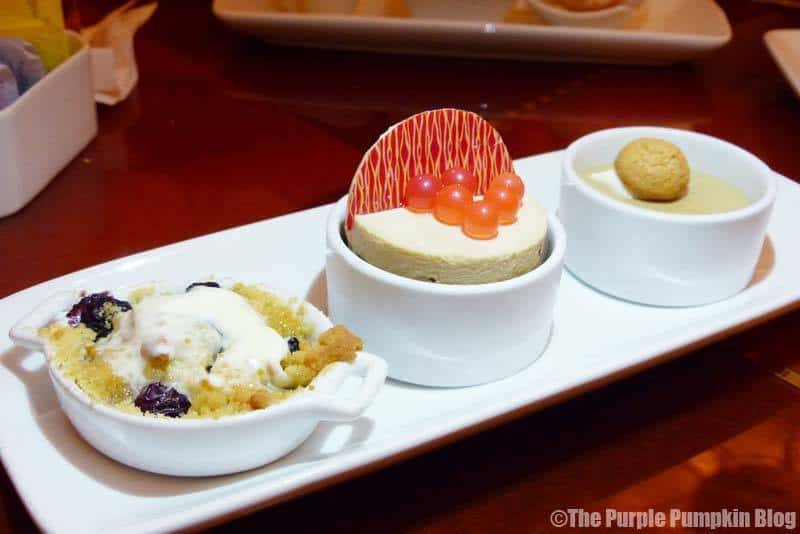 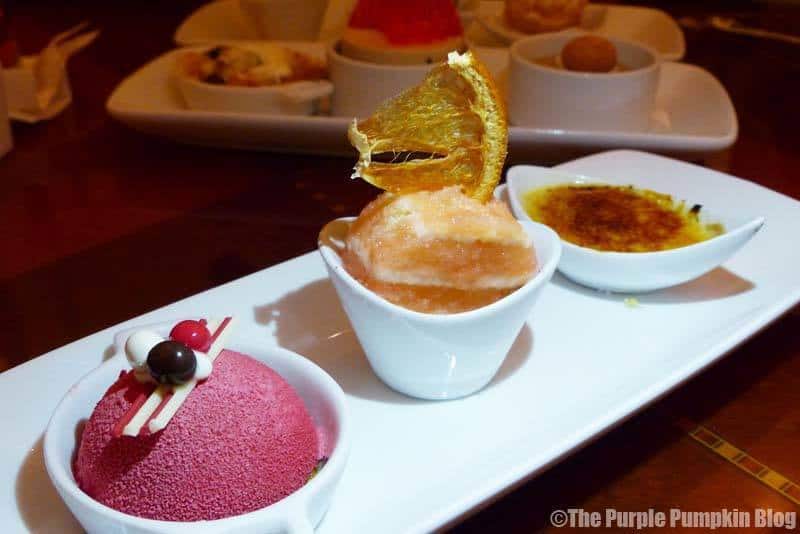 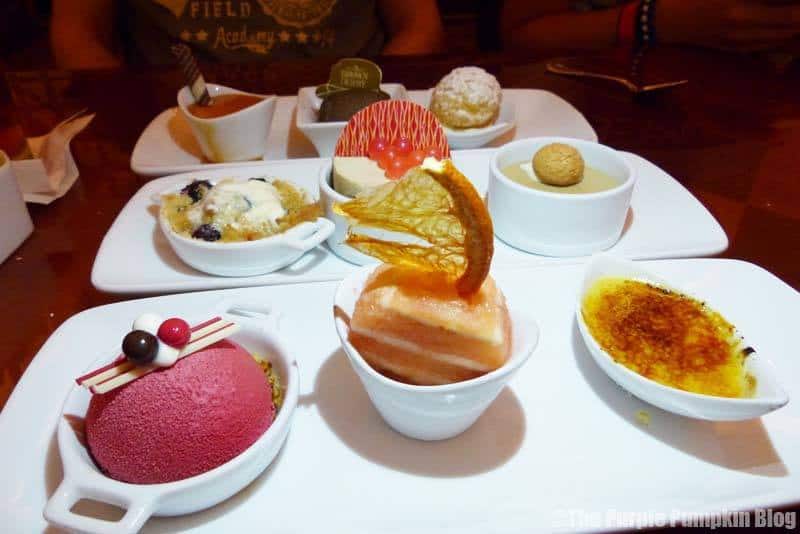 They were all very delightful and a really fun dessert too! I can’t tell you which our favourites were as I really can’t remember now, but I’m sure the photos of these mini desserts do them enough justice!

Towards the end of our meal, the restaurant really emptied out in readiness for the Villains Unleashed event that was happening, and the staff were moving chairs and tables all around us, which was most annoying! I know that they have to prepare, but they really should have stopped reservations in time for this to go on.

We thoroughly enjoyed our meal at the Hollywood Brown Derby and would go back and eat there again. 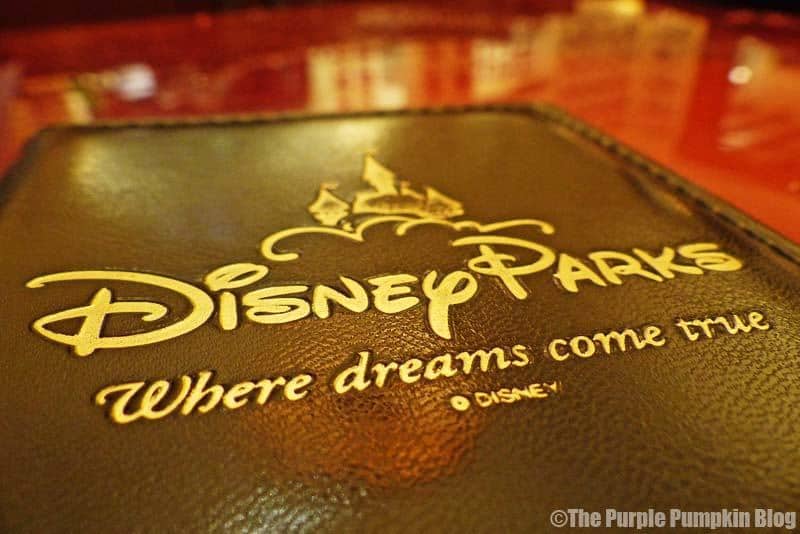