The day began with struggles to get our cat, Pumpkin, into her cat box. She knew something was up, and Liam had to chase after her a few times, before, with the help of my brother-in-law and some cat treat bribery, she was securely inside. She meowed all the way to the cattery, but it’s her third visit there, and I knew she would be fine.

Steve was home by 1:30pm managing to get a half-day off from work. We had a few last minute things to do – double checking passports, tickets and final packing before my dad turned up at around 3pm. It was nicer this way, than when, in the past, Steve is home about 4:30pm and we rush around to get to the airport hotel! With a mid afternoon drive, we hoped to not have too much traffic to contend with on the M25.

Fortunately, it was a really pleasant journey with no traffic and before we knew it, we were pulling up outside the Premier Inn. We’ve stayed here before in 2009, when we went to Cyprus for my sister’s wedding. It’s very close to the runway out the back, but the soundproofing is awesome! 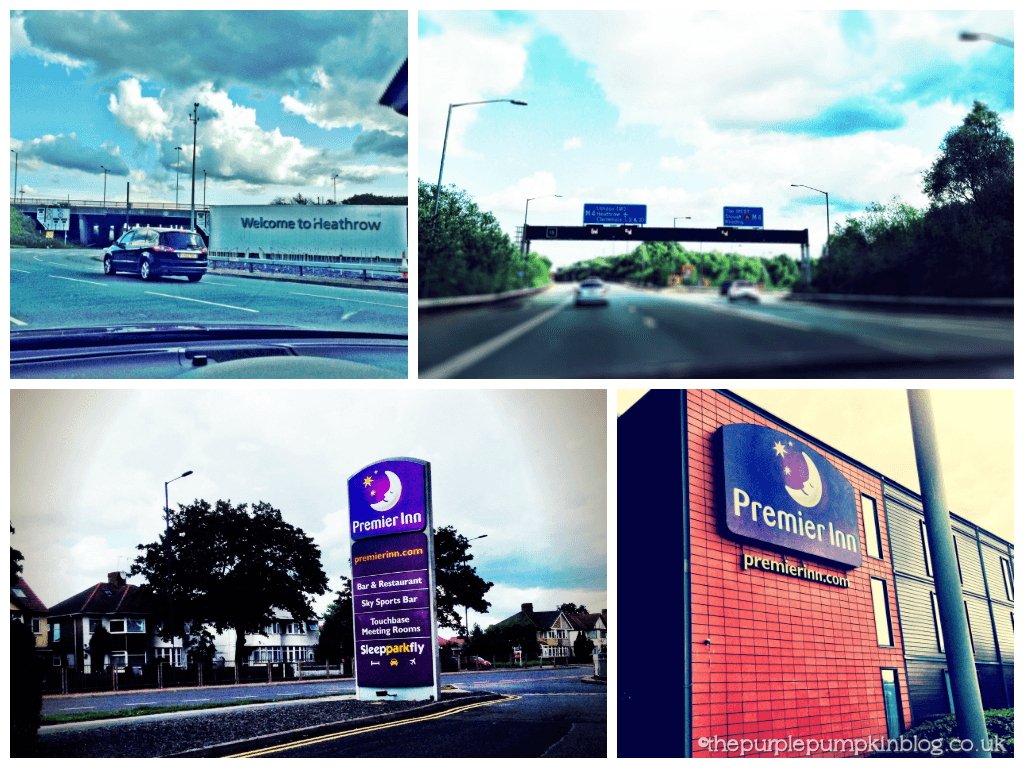 Steve organised the Premier Inn. We paid £94.98, which was £49 for the room, and £45.98 for a meal deal (dinner and breakfast) for me and him. Liam would get a free breakfast because he is under 16, and we paid separately for his dinner.

Checking in was easy enough, and we then dragged our cases to our room, which just so happened to be right at the end of a very long corridor! We sorted out our bits for the next day, and since we wouldn’t be able to do any sort of twilight check-in with Delta, headed back down to watch the planes landing, which you can see from the back of the hotel.

The rooms in Premier Inn are of a good quality for what you pay for them, the beds are comfy, you have tea/coffee facilities, and there is a pump action shower gel/shampoo on the wall of the bath/shower. 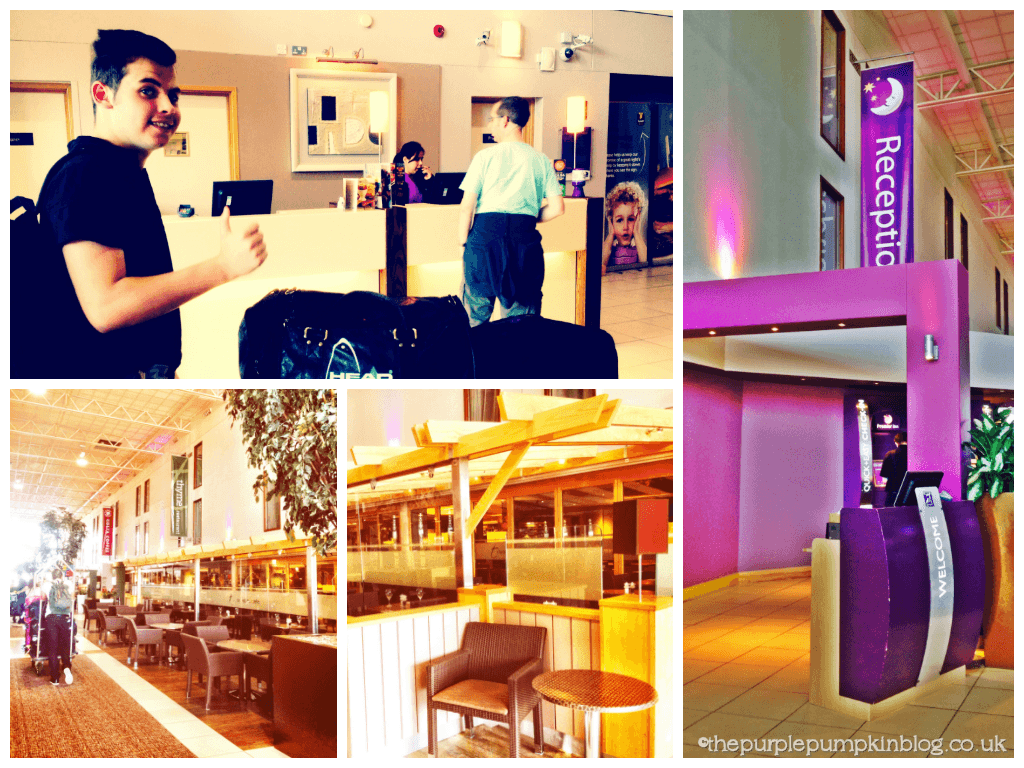 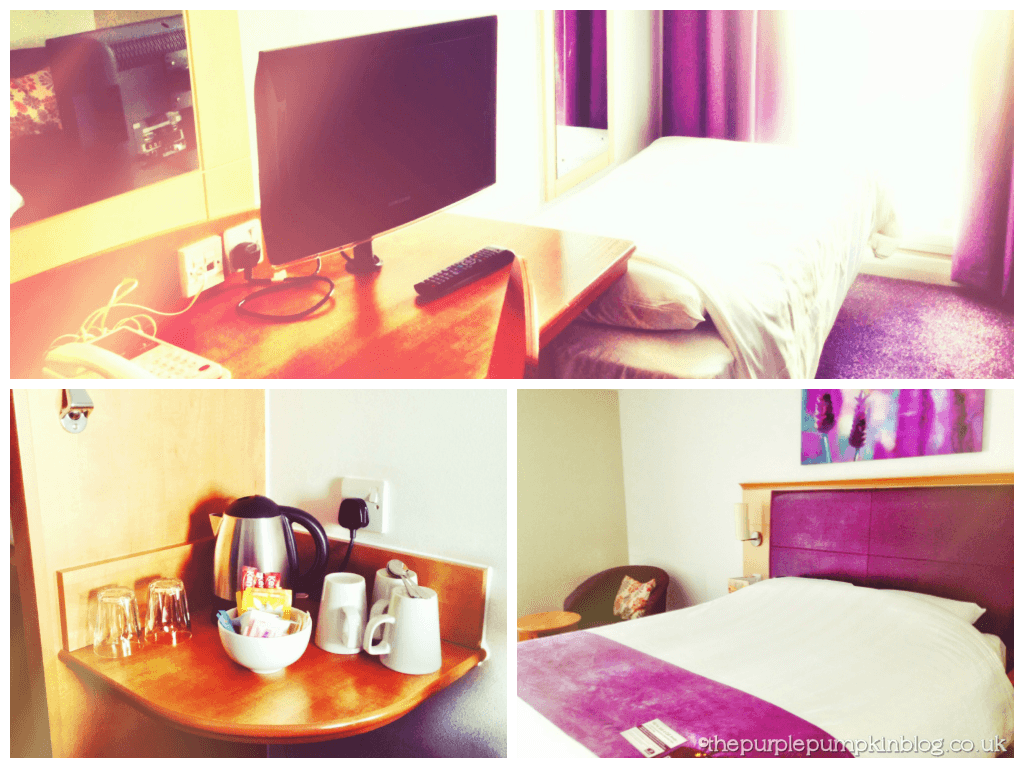 After watching the planes for a while, we decided to go and have our dinner a little earlier than planned. We would have to be up at stupid o’clock to drop our bags at the airport and do security etc, and knowing how hard it can be to get to sleep the day before going on holidays, this was the course of action. Fortunately, the Thyme restaurant was empty, so we got a table without a problem.

Having a meal deal meant that Steve and I were entitled to a 2-course dinner, either a starter and main or main and dessert, plus a drink. We all had starters and mains. This is not Disney of course, but it’s the first official meal of our holiday! We also treated ourselves to a bottle of plonk

For starters we had:

Tempura Prawns – plump and juicy prawns in a crispy tempura batter, with a sweet chilli sauce for dipping and house slaw on the side. (£5.99)

Crispy Chicken Wings – Five succulent chicken wings served with both Mild Jalapeno and Original TABASCO®sauces to give them an extra kick. Served with house slaw and a pot of cool sour cream. (£5.50)

We also ordered some sides, which were 3 for £3.30, when ordered with a meal. We picked:

Grilled Corn on the Cob – A buttered half corn cob in 4 bite size pieces.

All the starters that we had were presented in little bowls which looked nice. Liam didn’t get the TABASCO® sauce bottles with his, but we didn’t realise this until I looked back at the menu to jot down what we had in my diary! The grilled corn on the cob wasn’t grilled, but boiled.

For mains, Liam decided on a burger – fortunately, one of very few he had the entire holiday, which makes a change from last year when all he seemed to do was eat his weight in burgers! He said the burger was goooood, and finished the lot!

8oz Bacon and Cheese Rarebit Burger – We take our classic house burger and top it with back bacon and glazed cheese rarebit so it’s bursting with even more flavour. Served in a toasted glazed bun with tomato, crisp lettuce, red onion, gherkin and house burger sauce. Served with chips, house slaw and a pot of salsa on the side. (£12.45)

Steve decided to have a very manly main meal…

The trimmings were chips, grilled tomato, green beans and mushrooms. Sadly, they forgot to put chicken on his meal, and again, we didn’t realise until we looked at the menu afterwards. Steve enjoyed his mixed grill, despite the lack of chicken.

As usual, I can never decide what to have for dinner, but in the end I plumped for a hot dog…

A very yummy hotdog – a mess to eat though. However. I’m so classy, that I didn’t even bother trying to be polite about eating it *halo*

Food presentation overall was great, shame a few things were missing, and the service, despite being quiet, was a bit on the slow side. We also noticed around us, that children were going up to a buffet somewhere (the first time we ever stayed here, it was buffet only for dinner), and were disappointed to learn that Liam could have picked from that for his dinner, instead of ordering from the menu. That said, he was happy with his burger, but just annoying that the waiter didn’t bother to say anything to us. However, maybe he thought the boy was older than his 15 years.

With the wine, Liam’s starters, mains and the sides, we paid £32.03 for our dinner – ours was already included in the room price as I mentioned earlier. We left a £3 tip.

We decided to forgo desserts, and instead picked something sweet up from the coffee counter next door and take them up to our room. Liam bought a tub of Ben & Jerry’s ice-cream (£3) from a vending machine in the lobby. We bought a carrot cake (£2.05) and a cherry tart (£2.30) to take back to our room. Loved the way they packaged the slices of cake up to take away!

We also decided to pre-purchase our bus hopper tickets at the machine near the bus stop so we were ready to go in the morning. However, you can only buy them on the day of travel, so we had to leave it till tomorrow!

All fed and watered, we went back up in our room to watch a bit of crap on telly before turning in for the night. The room was really dark when you shut the curtains and flicked off the lights, and we all fell asleep pretty quickly. In fact, it was one of those weird, feels like you’ve been asleep forever kind of sleeps! The bed was so comfortable, best nights sleep I’ve had for ages! We were up with the lark the next morning (about 5am) but that’s tomorrow’s trip report entry

Read about the day after:
Day 1 – We Have Lift Off:
Travel Day – LHR-ATL-MCO; Old Key West, Olivia’s Cafe (Dinner)