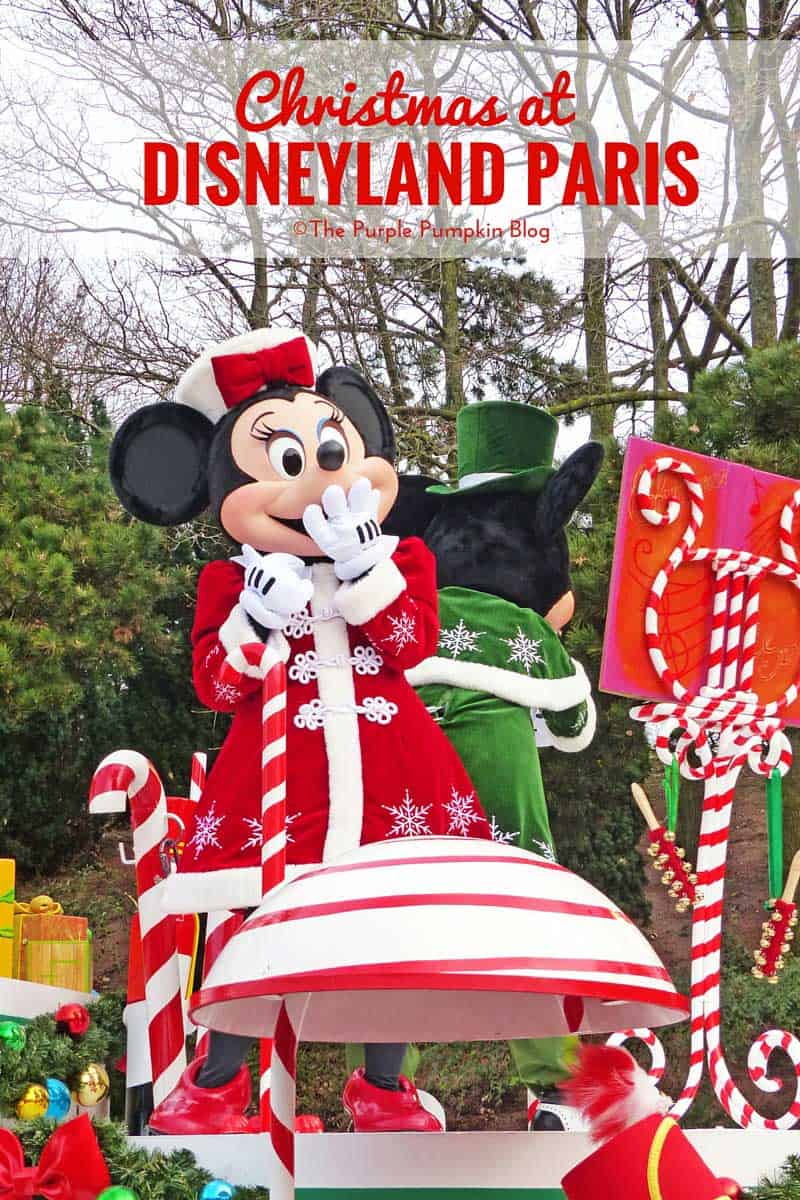 Before going to Disneyland Paris for Christmas, I said that if there is one thing I wanted to make sure we do, it was to see the Christmas Parade. And so, with a parade time approaching, I suggested it might be a good idea to find a spot for the parade. Fortunately, it wasn’t busy in the park at all (not by my usual Walt Disney World, as that’s all I know, standards!) and we waited just 10 minutes for the parade to begin.

The parade was lovely – and the songs were very catchy! We were singing away all day with them firmly stuck in our heads! It probably helped that we saw the parade several times over the couple of days that we were there, and as such, the photos that I’m sharing of the Disneyland Paris Christmas Parade are from several vantage points. I figured it was just easier for me to put them into one post, rather than splitting them up into chronological order as we went about our days at the theme parks!

Anna & Elsa lead the way, visiting from Arandelle, and riding an open carriage pulled by a pair of pretty white horses. I thought it was a bit weird to have that, and then wait another 10 minutes for the parade to start properly. After their trot through, a lot of people dispersed thinking that was the end!

Goofy led the parade as Master of Ceremonies, leading the Toy Soldiers, followed by the first float with Mickey and Minnie, Donald playing the drum, and Pluto hanging out at the back. Tinkerbell was at the top of the Christmas tree, sprinkling her pixie dust over the crowds.

Following behind were some Gingerbread Mickeys, Chip ‘n’ Dale (although, they weren’t in the first parade we saw), a gingerbread float, called Sugar and Spice, with Daisy Duck, and a female chipmunk who I’ve never seen in a parade before. Had to look her up – she’s called Clarice, and both Chip ‘n’ Dale battle for her affections! There was a Toy Story float with Buzz Lightyear, and Woody at the top, with Jessie, and Bullseye on the bottom. Followed behind by Green Army Men, and some toys, which I thought was fun. Oh, and musn’t forget Pooh, Tigger, Rabbit, and Piglet, bringing the Christmas mail.

Santa arrived on his sleigh, pulled by reindeer, and accompanied by Huey, Dewey, and Louie (Donald Duck’s nephews) and closed out the parade, which continued past Sleeping Beauty Castle, and down Main Street USA.

My favourite parade photo is not of the parade though, it’s of my niece clapping eyes on her very first Disney parade, and it was magical! I can’t wait to go to a Disney park with this little one again!

The video above is from the first viewing of the parade – there is another one on my YouTube channel, when we watched it in front of the castle. I’m going to leave this part of the trip report here, and the next will be about the different lands in the Disneyland Park.