Chinese New Year: The Year of the Snake

This is a partial repost from a post I shared last January with lots of inspiration for a Chinese New Year Dinner Party. I’m updating it for 2013 and will be able include some of my own ideas as inspiration :)

Sadly I am not hosting a Chinese New Year Dinner Party for 2013 – The Year of the Snake; but I can still share some ideas with you! 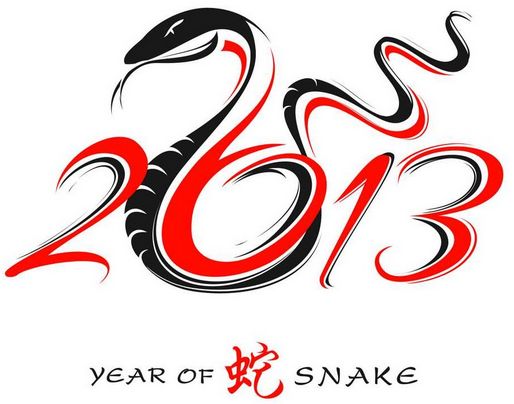 Chinese New Year starts on 10th February 2013, later than last year’s January date, I’m pretty sure I’ll cook up some low calorie Chinese food – would be a shame not to! But I won’t be hosting a huge Chinese Banquet like I did in 2012.

Chinese New Year is the most important of the traditional Chinese holidays. In China it is known as the Spring festival marking the end of the winter season. The festival begins on the first day of the month and ends with the Lantern Festival on the 15th day.

Chinese New Years Eve is a day where families gather for their annual reunion dinner and is known as Chú Xī or “Eve of the Passing Year”. Because the Chinese calendar is lunisolar, the Chinese New Year is often referred to as the “Lunar New Year”


I just LOVE sky lanterns. We have got some which we bought for our wedding (in 2009!) and never got around to using….perhaps this Chinese New Year is an excuse to finally send them up into the sky :) 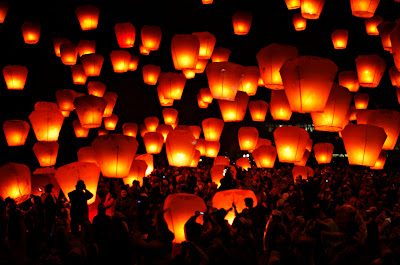 Within China, regional customs and traditions to celebrate the new year vary widely. People will spend lots of money on presents, decorations, food and clothing. It is also traditional that every family thoroughly cleans the house to sweep away any ill-fortune in hopes to make way for incoming luck. Windows and doors will be decorated with red colour paper cuts (jian zhi) and couplets (Chinese poetry) with popular themes of good fortune, happiness, wealth and longevity.

On the Eve of Chinese New Year, dinner is a feast with families, food will include dishes with pork, duck, chicken, fish and sweet delicacies. The family will end the night with firecrackers. Early the next morning, children will greet their parents by wishing them a healthy and happy new year and receive money in red paper envelopes. The Chinese New Year tradition is to reconcile, forget all grudges and sincerely wish peace and happiness for everyone.

The Chinese calendar is based on the lunar year, so the date of Chinese New Year changes every year. The Chinese calendar follows a 12-year pattern with each year named after an animal. There are various stories which explain this. The simplest is that Buddha (or the Jade Emperor) invited all of the animals to join him for a New Year celebration, but only 12 animals turned up. To reward the animals that did come, Buddha named a year after each of them in the order that they arrived, starting with the Rat, followed by the Ox, Tiger, Rabbit, Dragon, Snake, Horse, Goat (or Sheep), Monkey, Rooster, Dog and Pig. Depending on the year you are born, you are believed to have the various character traits of that year’s animal.

By the way, I’m not this knowledgeable about Chinese New Year! I got all the information from Wikipeadia and ChinaInteresting.com which you can read and find out more, if you are interested. ^_^

I live pretty close to London where Chinatown holds celebrations for the Chinese new year and I remember going there as a child with my parents and seeing the lion dances and trying the food. Great fun!

Last year, I visited Chinatown and took some photographs – I hope to go up there again this year!

Chinese New Year falls on different dates each year in the Gregorian calendar, a date between January 21st and February 20th. This year it falls on February 10th. 2013 is the Year of the Snake

One thing I love about Far Eastern cultures is the symbolism of things. Wiki tells me that the following things are symbolic at Chinese New Year and are popular decorations. I’ll try and get as many as I can to decorate with!

Red is the predominant colour used in Chinese New Year celebrations. Red is the emblem of joy and symbolises virtue, truth and sincerity. The sound for the Chinese word for red is “hong” in Mandarin and “hoong” in Cantonese which also means prosperous. Therefore the colour red is both and auspicious colour with an auspicious sound.

With all the symbolism and decoration covered, it’s time for the food! But of course, my research teaches me that even the food has symbolism…here are some photos of Chinese food to give us inspiration on what to prepare for a Chinese banquet at home!

Noodles represent a long life; an old superstition says it is bad luck to cut them.

Spring rolls symbolise wealth because their shape is similar to gold bars.

A food may have special significance during Chinese New Year because of the way the Chinese word for it sounds. For example, the Cantonese word for lettuce sounds like rising fortune, so it is very common to serve a lettuce wrap filled with other lucky food.

Tangerines and oranges are passed out freely during Chinese New Year as the words for tangerine and orange sound like luck and wealth, respectively.

Fish also play a large role in festive celebrations. The word for fish, “Yu,” sounds like the words both for wish and abundance. As a result, on New Year’s Eve it is customary to serve a fish at the end of the evening meal, symbolizing a wish for abundance in the coming year. For added symbolism, the fish is served whole, with head and tail attached, symbolizing a good beginning and ending for the coming year.

Cakes such as Sticky Rice Cake have symbolic significance on many levels. Their sweetness symbolizes a rich, sweet life, while the layers symbolize rising abundance for the coming year. Finally, the round shape signifies family reunion.

Dumpling symbolise family togetherness. They also represent wealth and prosperity because of their crescent shapes, which look like the ancient Chinese money. In preparing these goodies, a gold coin is placed inside one of the dumplings and whoever bites into it is considered lucky.

Wow, I never thought when I started typing this that I would actually go so deeply into the customs of the Chinese New Year, I figured I’d find some photos, put them up and post done…but in doing this post I’ve gained lots of knowledge about the Chinese New Year and been given lots of interesting ideas for decoration and foods.

And now, let me re-share with you some of the photos from my own Chinese New Year celebrations in 2012 – my year, the Year of the Dragon :)

I kept to a very vibrant colour theme of red and gold…I made invitations and menus and place names…I loved how everything looked together! And my table looked even better than I had hoped!

I had bought lots of dragon decorations from Chinatown and popped some money into lucky red envelopes. Just seeing these photographs I’m reminded of what a great dinner party it was :)

Since it was a banquet, I made a lot of dishes – and they were all so tasty! You can find all the recipes in the blog post where I rounded the party up; I invite you to take a look at that post and try some out!

To round off this post, here are some photos for even more ideas to celebrate Chinese New Year with your friends and family.

Will you celebrate Chinese New Year? It’s a great excuse to get in the kitchen and try your hand at some Chinese cooking. I love the reds and golds of Chinese New Year, and you know, I may just have to throw a party ;)