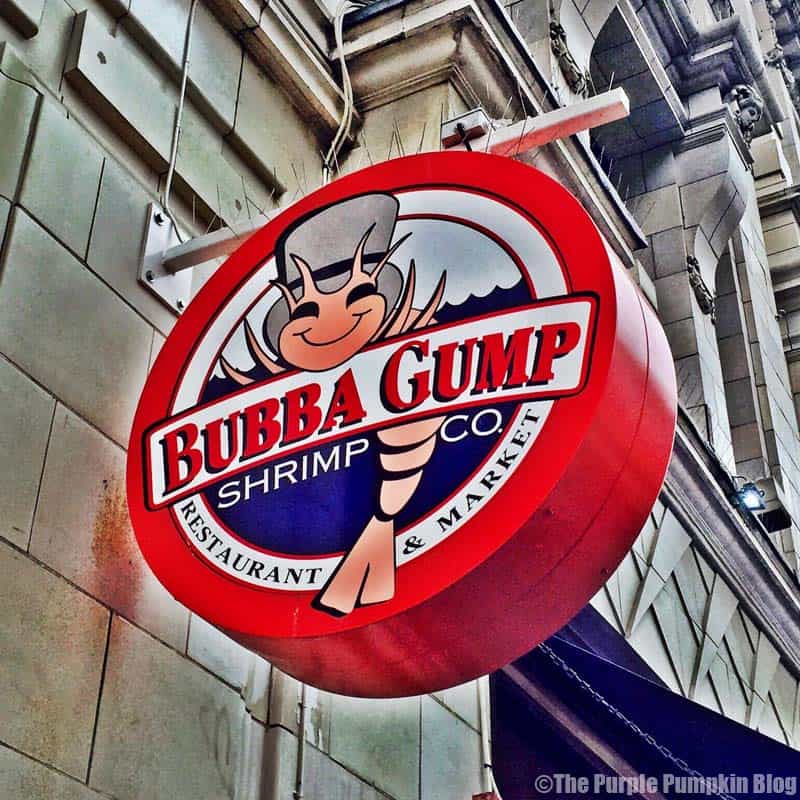 You may have read about our visit to Ripley’s Believe It or Not! London a few days ago, as part of a blogger event that my family and I were invited along to? Head over and take a look, I’ll wait!

Well, after seeing all the weird but wonderful exhibits there, we were then invited to dine at Bubba Gump Shrimp Co. just a short walk away. It’s funny, the last time we went to Ripley’s London, we went to the same building for food afterwards, when it was a different restaurant! Anyway. We were looking forward to eating here as we’ve dined at the Bubba Gump Shrimp Co. in Orlando back in 2013 and hadn’t yet made it to the not long opened London location.

There were lots of bloggers there with their families, and it was a bit of a free for all for the tables. By the time we wandered in, there were no tables left, so we asked other tables if there was a spare chair we could use and plonked ourselves down around a large round table! We were served a choice of soft drinks, and I requested a bucket on our table, as it of course hadn’t been set! 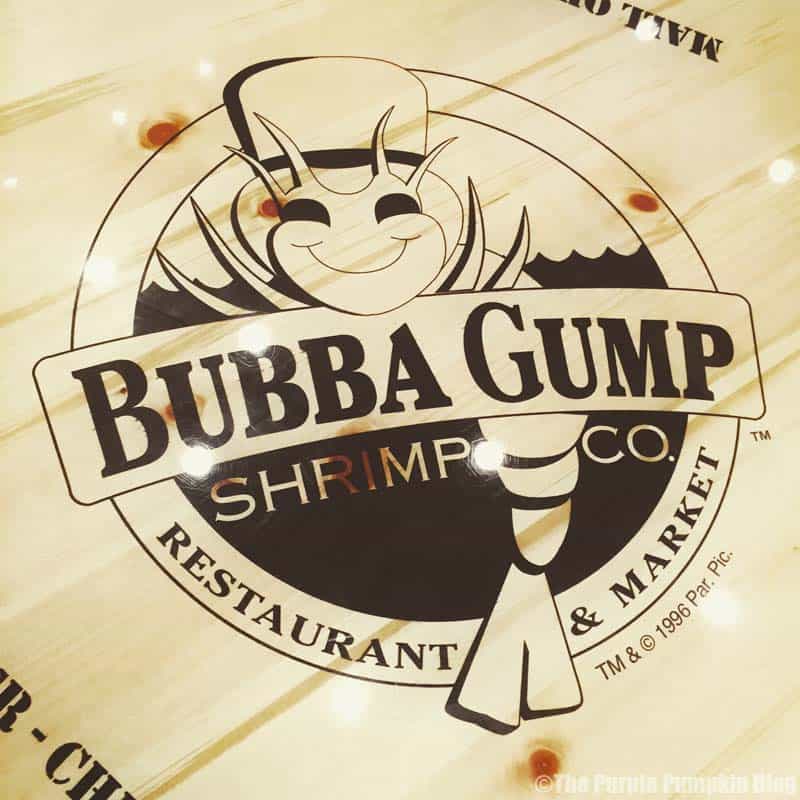 Since we were not having regular service on this visit, the signs Run Forrest Run and Stop Forrest Stop, were not explained to us. But essentially, what this means, is if you have the stop sign up, you need your server’s attention, and if it is set to run, they are okay to run on by. Very handy, and saves you worrying about trying to keep your eye out for a server! I know this from our visit to the Bubba Gump’s in Orlando! The buckets are awesome, I kind of want one :D They have some condiments inside, cutlery and a roll of kitchen paper to clean yourself with after noshing on shrimp and ribs! 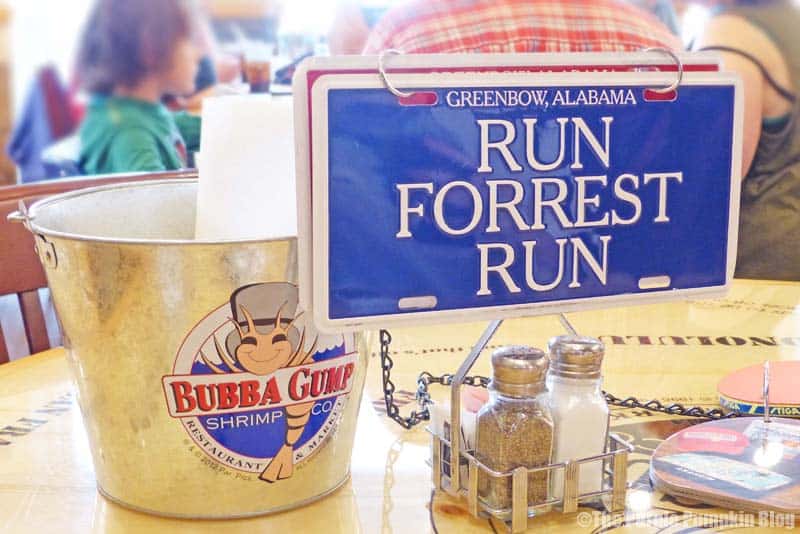 The kids were served first, with their choice of food, which you can see on the menu below. We were looking forward to the sampling of some of Bubba Gump’s signature dishes, and watched as the servers brought out cardboard boats filled with food for the children, which were pretty cool. I took some photos of the decor, which was awesome – wish I had taken some more, but just, erm, didn’t, which isn’t like me at all.

As the children were being served, staff were bringing out plates of food and leaving them on a buffet table, since I was jammed in the corner, I asked my husband, Steve to take a few photographs of what was on offer. I will admit to feeling it was a bit of a shame that the food was served in this way, as it meant everyone lining up, and sadly, the food getting a bit cold. I did mention this to Chloe who was there overseeing everything, and she apologised, telling me how she wanted everyone to be able to sample lots of different things.  It would have been nicer (I think!) to have a platter per table that we could have all shared – or, much like the kids, a choice from the menu – but I understand the reasoning behind doing it the way it was done. I will stress that there was nothing wrong with the food, the taste was good and the variety of dishes (very similar to those I remember from the menu in Orlando) was great. I just wish it had been piping hot!

Our award winning Ribs are brushed with our own homemade BBQ sauce, slow roasted to perfection and served with fries.

Our twist on a Bubba’s Classic! Beer steamed Peel ‘n’ Eat Shrimp, along with Carrots, Celery, Corn, Potatoes and Sausage all steamed and tossed with Garlic Spice or our Secret Cajun Spice recipe.

Not quite Hush Puppies – we make em’ better! Tasty Shrimp and Fish with golden corn, deep fried and served with a Remoulade dippin’ sauce.

Other dishes, which I don’t seem to have photographs of were:

Shrimper’s Heaven – Love Shrimp? This one’s for you! Hand Breaded Coconut Shrimp, Chilled Peel ‘n’ Eat Shrimp, Fried Shrimp and Japanese style Tempura Shrimp with Fries. And of course great dippin’ sauces like Tangy Asian, Cajun Marmalade and Zesty Cocktail.  (This is what I had for my meal in Orlando!)

Bubbas After the Storm ‘Bucket of Boat Trash’ – Flash fried Shrimp, Fish with Cajun Spices and a steamed cluster of Snow Crab. Served with fries.

I do love how the food is presented here – the cone holders for the shrimp, fries, calamari and hush pups are cool, and I loved the tipped over pan with the Net Catch Entree. Of the food we sampled from the platters, the Hush Pups were the best – loved these in Orlando, and loved these here. The Mac & Cheese was good too, just wish it hadn’t been cold. I’m not sure what fish they use for the battered fish, but I remember it being very strong tasting, and I wasn’t a fan, neither was Liam. Steve said the ribs were good, but again, sadly cold. I really do hope that this is just because of the time the food had been sitting out on the table as we all served ourselves, rather than coming cold from the kitchen.

We were offered to order something from the menu, and since Liam wasn’t so keen on anything he tried, and was still hungry, ordered a BBQ Cheeseburger with frizzled onion strings and fries. Steve and I shared one of these too. When the food was hot – it was ace, and we really enjoyed the burger!

Just before desserts were served, the waiting staff tested our knowledge of the movie, Forrest Gump with a pop quiz. I’ve not actually seen the film, but somewhere along the line, Liam has, and so he was able to call out answers!

Dessert was served in the same way as our lunch, with small taster platters to help ourselves to, which included:

Although, the biscuit with strawberries wasn’t on the platters that we were served, so no photos of that I’m afraid!

We shared one of each of the desserts – the key lime pie was lush, and the bread pudding was good too; although, for my tastes a bit too powerful on the cloves. I wasn’t a fan of the cookie, it tasted weird to me, but maybe that was the cloves from the bread pudding!

On our way out, we each received a gift bag to take home with us, which included, redneck cocktail glasses! They are added to my collection of two that we bought in Orlando, which is where the photo below is from.

Would I visit Bubba Gump Shrimp Co. London again? Yes I would, and not just because it’s a lot closer than Orlando ;) I’d also like to see the other side of the restaurant too, which Steve said was huge, when he nipped over there to go to the loo! It’s the sort of restaurant that is fun and a little bit different if you’re out for the day in London, and I wouldn’t mind buying another one of the redneck glasses so I have a set of 6!!

Downstairs, is a gift shop area, no magnets for us though (our usual, wherever we go we must buy a fridge magnet souvenir!), as there weren’t any on sale that we could see. I chatted to another blogger, and snapped a picture of the very famous box of chocolates that was sat on the waiting bench!

Have you been to Bubba Gump Shrimp Co. London (or one of the others over in the USA)? What is your favourite dish on the menu?